My kids like memory games, and we have several versions of them around our house. And, actually, we often turn non-memory games into memory games just for fun because we like them so well.

For my son's recent birthday party, (full blog recap to come) I made a candy memory game for he and his friends to play. 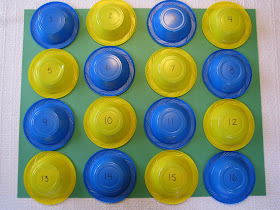 I wanted it to be bright and colourful, since it was for a party, so I went to the dollar store and bought bright green poster board, and then arranged inverted disposable bowls in blue and yellow. Having two colours of bowls not only increased the visual appeal, it also added a memory cue for the kids, ie "was it under yellow or blue?" Then, to add another way for them to remember, I wrote numbers on the base of each bowl as well. 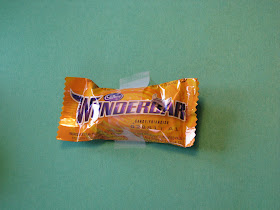 Now for the fun part: after spacing out the bowls on the paper, I lifted each, one at a time, and taped a miniature chocolate bar under them. 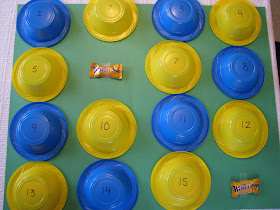 Then as the players made matches, they also had a fun little prize to keep.